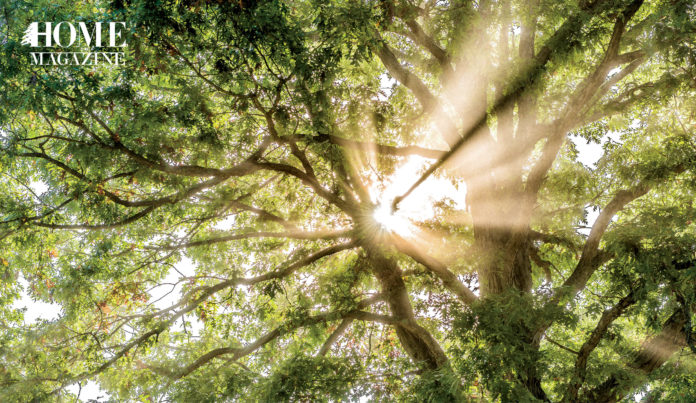 People spend most of their lifetimes inside buildings whether at HOME, work or otherwise. While workspaces are also important, HOMEs are probably more fundamental with regard to a very basic human need: shelter and refuge.

When it comes to residential HOMEs, it is clear that humans strive to make them as comfortable as possible from a technical and financial standpoint. To have comfort, energy is required and in fact HOMEs consume a significant fraction of a nation’s energy budget. In the United States, residential HOMEs consume about 39 percent of the nation’s primary energy resource. In Lebanon, the percentage of total generated electricity used in HOMEs runs at about 30 percent, according to a World Bank report.

In fact, in the United States, heating is the highest consumer of primary energy at about 31 percent of the residential tag. In Lebanon, where the climate is much milder across most of the tiny country, the major consumption is for cooling rather than heating. It is estimated that cooling accounts for nearly two-thirds of the residential electrical energy consumption.

It is possible to list the major needs in a residence as: cooling in deep summer, heating in deep winter, lighting at night throughout the year, and appliance usages on an intermittent basis. A large fraction of our HOME energy use is electricity-driven since it is a convenient driver with a high utility. Nevertheless, sometimes it may be substituted by less costly means of energy usage. One such case is water heating using solar water heaters.

The introduction of solar HOMEs as a concept is an attempt to make HOMEs more environmentally linked to the major source of energy on Earth: the sun.

It is obvious that solar-based design concepts are most readily applied at the construction stage, although retrofitting and integrative measures may also be considered. Recently, there has been work on building integrated solar designs, which integrate solar thermal or solar electric structures into existing buildings or structures.

“We are what stars are made of,” as the late famed astronomer Carl Sagan said. If the elements we are made up of were “cooked” in the sun, then it makes sense to use the energy of those heavenly stoves to make our living more comfortable. The best course is to keep it simple and follow the sun! A passive solar HOME would make the best use of sunshine with minimum human active intervention — that is, with minimum need for purchased electric power.

The HOME would be an attempt to blend in the environment while also providing basic needs as well as some luxury and aesthetic value. Structural and similar energy loss/gain measures in the HOME envelope (the HOME walls) are also necessarily implemented. Such measures include adding thermal insulation features such as insulating attics, double walls, dealing with windows and so on. Beyond implementing the above, some possible passive solar HOMEs ideas include the following, with an explanation to follow:
1. Deciduous trees on south façade or evergreen trees on the north side.
2. Using overhangs, louvres and fins to shade exposed facades in summer.
3. Dealing with the roof, maybe with green roofs.
4. A Trombe wall /solar chimney.
5. Solar walls /green walls.
6. Aligning long axis of HOME to minimize summer sun in summer (for HOMEs on the coast).
7. Aligning long axis of HOME to maximize summer sun in winter (for HOMEs in the mountains).
8. Minimize windows (and walls in general) on north side. 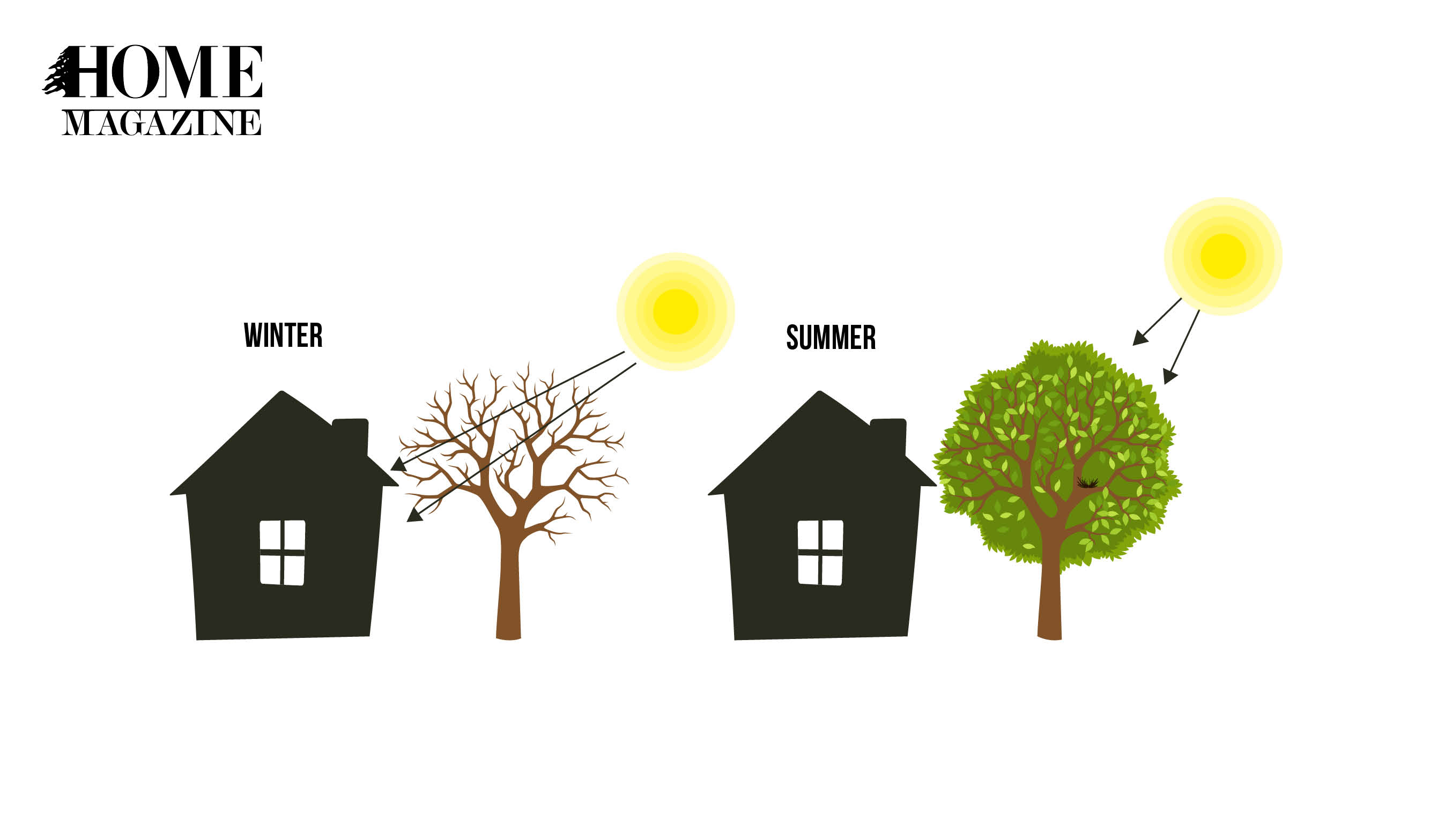 Trees are an amazing natural structure, besides being living things! Their form is unique in that their bulk area normally increases with height (poplar, deciduous oak, etc.), except for small bushy trees like hazelnuts or oleander. More interestingly, the stone pine (Pinus Pinea) has a unique umbrella shape when fully grown. The former are deciduous while the latter is evergreen.

Deciduous trees have the further feature that they drop their leaves in winter to conserve energy. Planting deciduous trees in front of the south side of a HOME helps shade that façade of the house.

On the northern façade, it is useful to plant bushy or bulky coniferous or other evergreen trees as these tend to shield the HOME from the normally cold north winds. Candidate trees include Lebanon Cedar or other Cedars, Leyland or Lawson cypress, fir trees or junipers. In addition, evergreen non-coniferous trees (for example, Carob or evergreen oaks like the Caliprinos (Sindian) oak or holm oak) may also be partly used depending on the shape. Stone pines, having a palm-like tall bare bole may not be a good choice of coniferous trees for northern exposures. 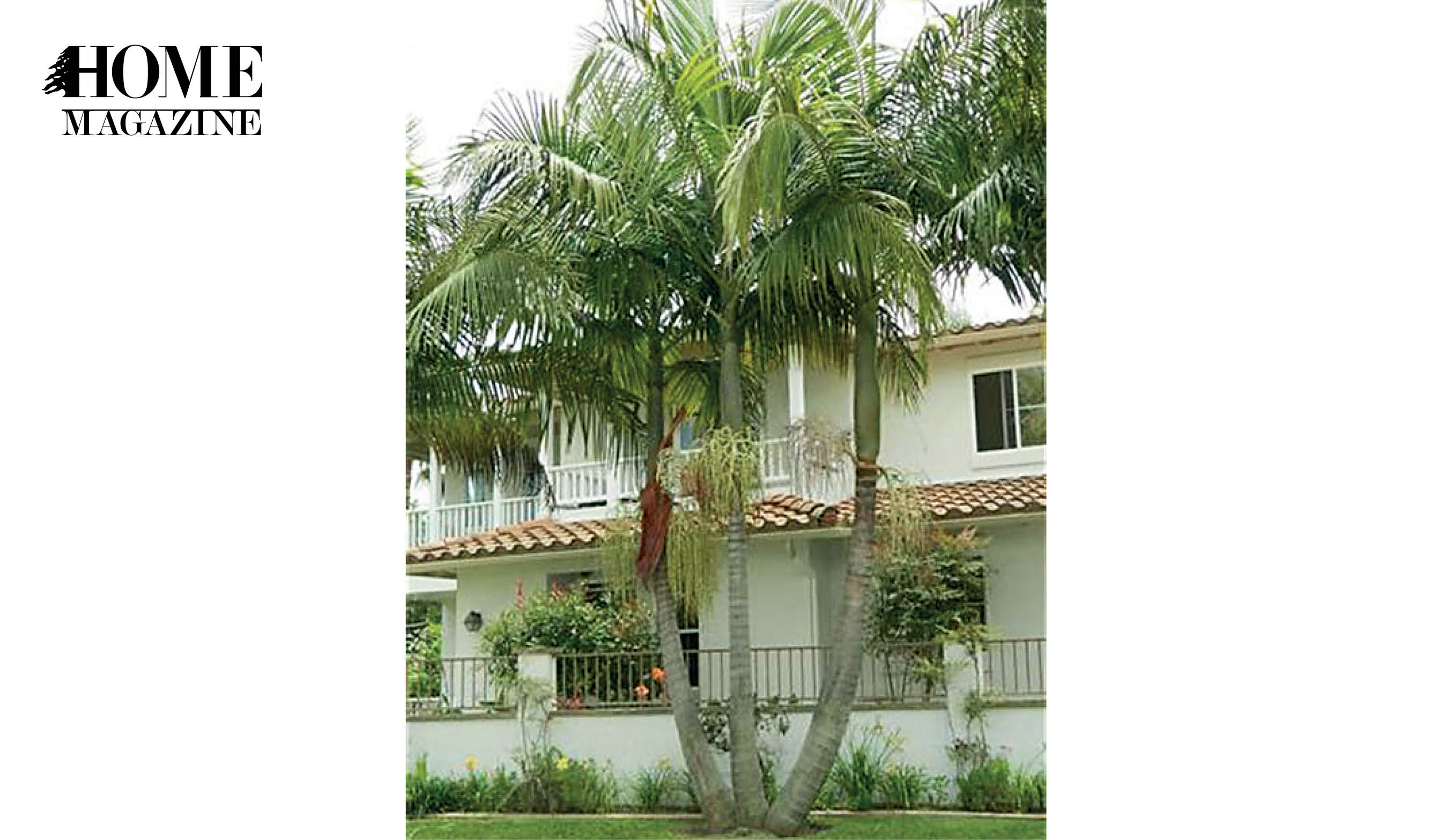 The picture illustrates how mature palm trees, which have long bare boles, can be instrumental in shading a second floor while keeping the ground floor illuminated. If ground floor shading is needed, smaller shrubby trees could be used. 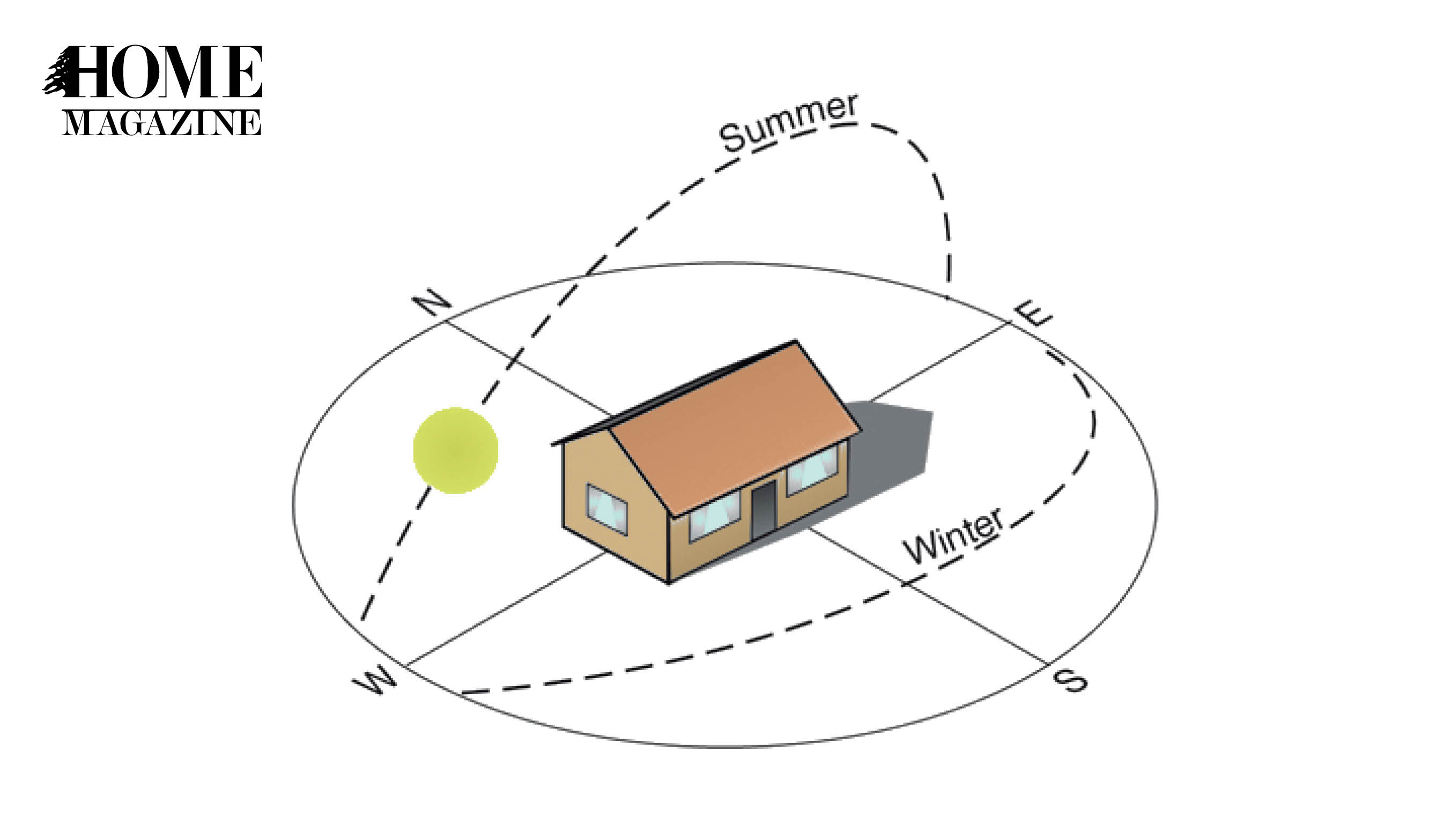 In a relatively warm climate such as coastal Lebanon, minimizing heat gain is a problem. As such, it would be logical to try and minimize the east-south-west sides, hence aligning the HOMEs axis on a north-south direction. The reverse may be true in the cooler climates of rural mountainous Lebanon.

Overhangs are architectural features that allow shading of HOME facades from the direct solar beam. In its simplest form, it could be an extension of the upper room slab or it could be also an extension of a gabled roof. The picture shows a building at Rafik Hariri University (RHU) in Mechref, Lebanon. The approximate noon shading on the building’s west façade is apparent, thus reducing air conditioning expenditure. 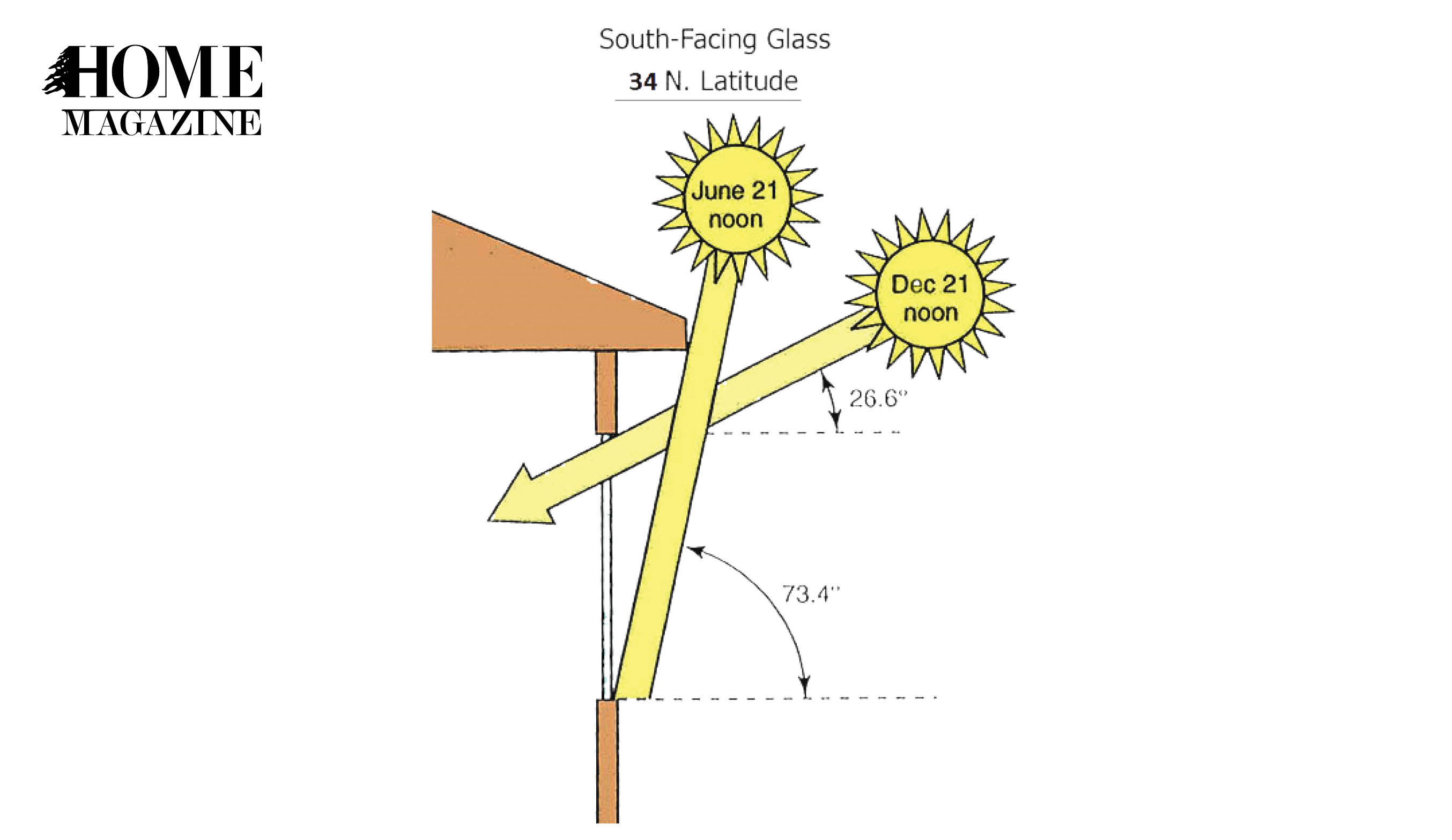 The north façade receives the least sunlight over time. This side would normally be the coolest part of the HOME, although it may become very cold in winter and particularly in inner Lebanon (mountainous Lebanon and Bekaa). However, with hot summers, it would also be useful to benefit from this side’s cooler feature. Thus, good house designs minimize the northern wall area while trying to limit the areas that receive direct solar heat gains in the summer.

Many rural HOMEs in Lebanon can be difficult and costly to warm in winter. Certainly simple design features at the construction stage can help. These include insulating walls sufficiently, double glazed windows and more. Beyond that, an additional and not complex design feature could be the incorporation of a Trombe design on the south façade. This is especially useful in the colder areas such as the mountains and the Bekaa plateau in winter. 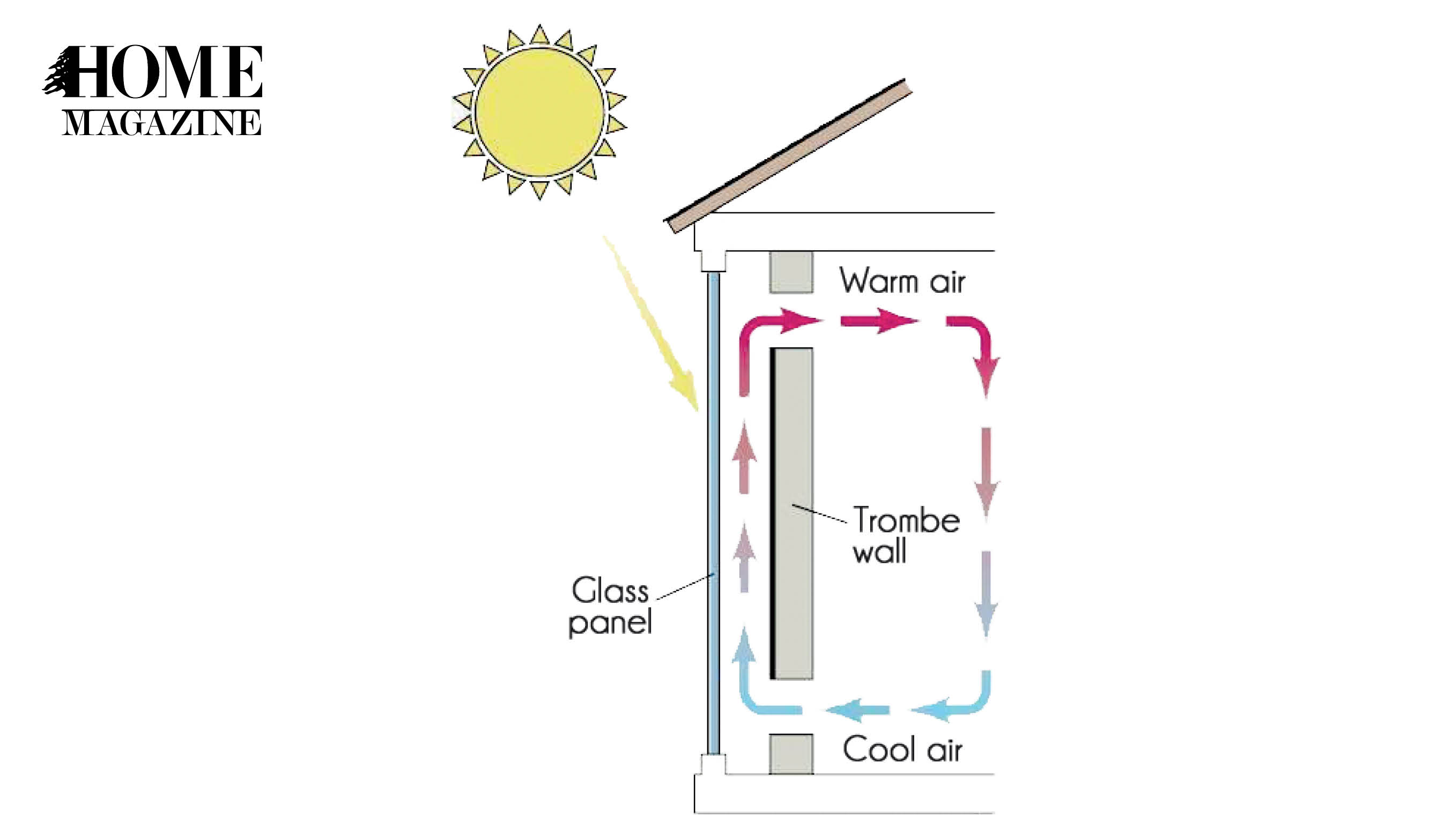 The design is simple: it involves adding a thick wall structure that has its outer surface coated with a matt black non-reflective paint. A small distance beyond that on the exterior, a thick glass wall is fitted (or a few series-parallel standard windows without sills).

The gap between the wall and glass will contain trapped air if the structure is well sealed. In fact, such a structure resembles a closed solar air heater that is placed vertically (see figure). Thus, the sun’s rays pass through the glass, heat is absorbed in the dark wall and is passed through the wall to the interior at a pace that depends on how thick the wall is. The wall tends to store heat some time beyond sundown.

Green roofs are excellent means of controlling heat transfer through roof slabs. In fact, studies (Liu and Minor, 2005) found that green roofs could reduce the heat flows through the roof by 75-90 percent in summer and by 10-30 percent in winter. Of course, the installation of a green roof requires careful structuring of the roof moisture barriers and also careful selection of vegetation that is tolerant of minimal watering in summer.

To all this must be added the aesthetics: there is nothing more beautiful than the green of nature.

Maybe Bilbo Baggins and the Hobbits† knew about passive HOMEs in Middle Earth! While we are not so lucky to be there, at least some measures can help us here! 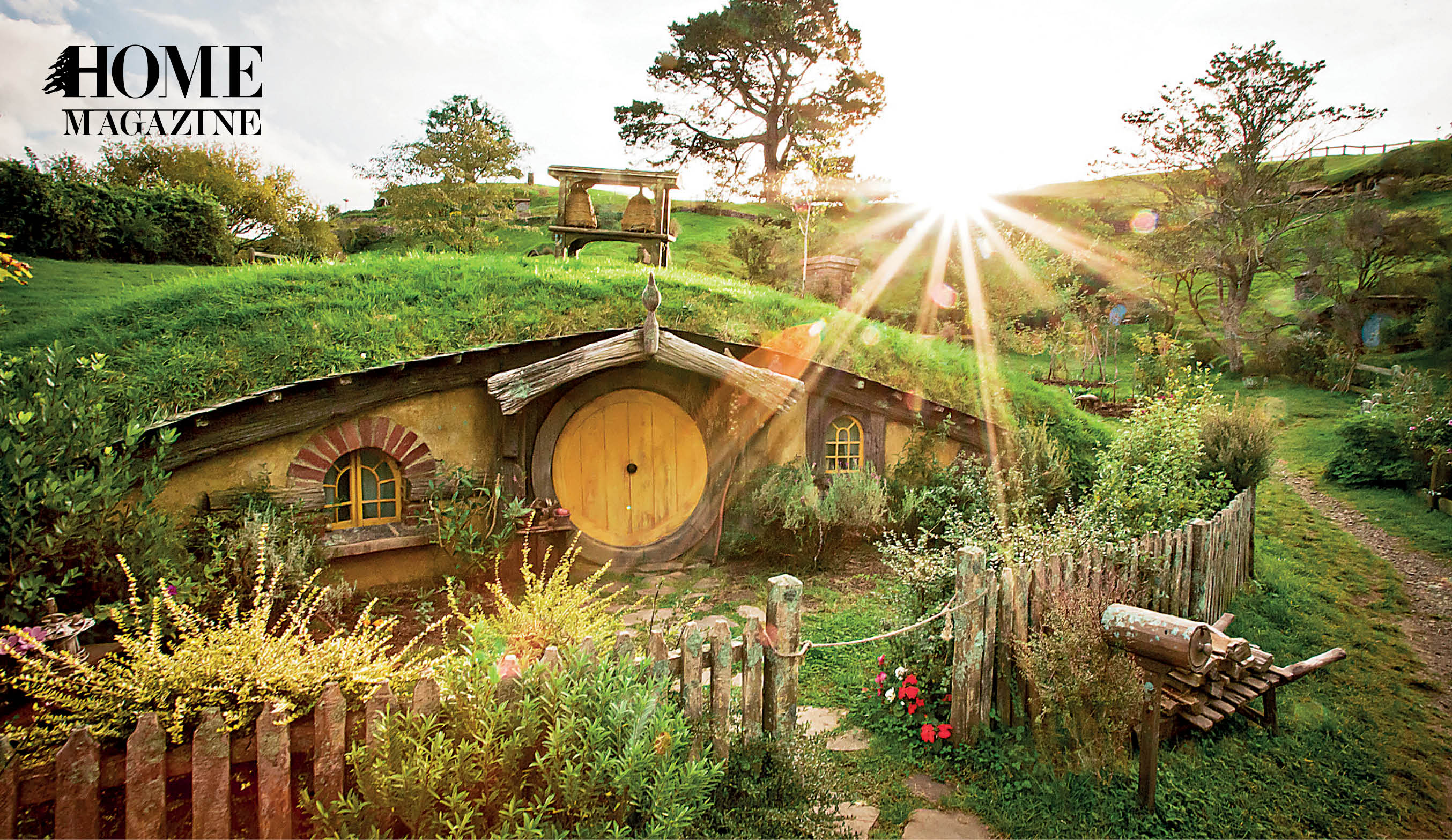 † The story of Bilbo Baggins and the Hobbits comes from the novel and later the hit movie Lord of the Rings by JRR Tolkien. It depicts the imaginary land of Middle Earth and its constant battle with evil forces trying to scorch the land.